Juvenile myoclonic epilepsy (JME) is one of the most common forms of idiopathic generalized epilepsy. Clinical presentation of this disorder includes myoclonias (usually in upper extremities) with tonic-clonic generalized seizures and absences [1]. JME belongs to age-dependent type of idiopathic generalized epilepsy. Age of onset is usually within 8 to 26 years, and incidence peaks at 14-16 years. The onset is triggered by stress, disturbances in circadian rhythm (night sleep deprivation, early wake-ups), menarche in teenage girls [2]. Despite preserved intelligence, there is a high risk of anxiety and depressive disorders. This leads to social disadaptation and unemployment, which considerably aggravates social prognosis for patients with JME [3].

Dysfunction of frontal lobe, which is responsible for decision-making, individuality, motion and speech, was demonstrated in patients with JME [4]. Tapping is known as a psychomotor test for evaluation of brain psychophysiological functions, such as time perception [5]. Tapping without any external influence with subject-defined rhythm is a “biological constant” which reflects rates of nervous processes and endogenous processes within central nervous system (CNS) [6]. According to V.A. Rudnev, so- called “intrinsic time” is a genetic core of all motor activity bearing features of a whole population, as well as individual features of a specific human being [7]. Intrinsic time manifests itself as set internal rhythms. Spontaneous rhythm generated by tapping without any programmed external stimulus is registered as a so- called individual rhythm, which is exactly a genetically coded intrinsic time.

There is a large number of studies dedicated to individual rhythm in humans, its «maturation» in late ontogenesis and its disruption in certain neurological conditions (cerebral palsy, stroke, head injury, parkinsonism) [8-11].

Individual rhythm reflects balance in CNS function and its disruption typically suggests disintegration of brain activity [6]. As patients with epilepsy have pathological activation of brain neurons, which is stressful for CNS, we thought that formation of an epileptic system may change an individual rhythm in a given patient.

V.A. Rudnev (1982) thought that movement cyclicity in wrist tapping is a natural statistical pattern, a standard against which certain parameters may be measured. Consequently, study of these biologically appropriate movements gives us the ability to determine tendencies towards certain paces and rhythms of motion, which may appear in various disorders at different levels of human nervous system [7].

The goal of this study was to evaluate the influence of anxiety on wrist tapping parameters in normal conditions and in JME.

Before the main part of the study, all subjects (groups I and II) completed the Hospital Anxiety and Depression Scale (HADS) questionnaire [17], which is designed for express screening to evaluate anxiety and depression levels. This scale was proposed by A.S. Zigmond and R.P. Snaith in 1983 to identify and quantify severity of depression and anxiety in general medical practice. The scale has high discriminant validity for two disorders: anxiety and depression. According to questionnaire results, every group was stratified into 2 subgroups: subgroup «a» – absence of reliable symptoms of anxiety and depression (0-7 points); subgroup «b» – subclinical anxiety (8-0 points).

Wrist tapping was studied using method of our authorship, patented in Russian Federation as «Method of influencing a person’s individual rhythm through exogenous rhythmic stimulation» (No 2015111025, October 20, 2016). This method implies finger tapping on screen of a device (Android-based smartphone) (Figure 1) for 1 minute with frequency comfortable for a subject. Software was able to register temporal parameters of this process (number of taps per minute), pressing intensity and steadiness throughout the whole cycle [18]. Software automatically calculated average, maximal and minimal frequency (in Hz); average, maximal and minimal interval between taps (in seconds); pressing intensity and percentage of rhythm steadiness. Data of wrist tapping study results were in the form of a list of intervals between taps. An algorithm divided this common list in three parts. Every part had an average value of interval (centroids of a list). They were divided so that all intervals within every part were closer to their centroids, than to centroids of other parts. First of all, initial values for centroids were determined using k- means++ algorithm. Next, iterative calculation of clusters is performed using k-mean method.

To determine the individual perception of one minute we used a stopwatch; each subject was told to count to 60 to oneself and to say «stop» after that. Then the stopwatch result was registered. The study was performed in the morning in absence of external sensory stimuli (loud sounds, bright lights), with only patient and doctor present, during wrist tapping procedure. Air temperature in the room was within range of 22-25 degrees Celcius.

Healthy volunteers and patients with JME received no fee for participation in this study, as well as researchers who conducted it.

Database was analyzed using Statistica software, version 10 (StatSoft, USA). Normality of distribution for all variables was checked with Shapiro-Wilk test. Non-parametric variables were obtained in this study. To evaluate significance of differences between variables we used Mann-Whitney test. Findings were considered to be statistically significant when p-value was lower than 0.05. 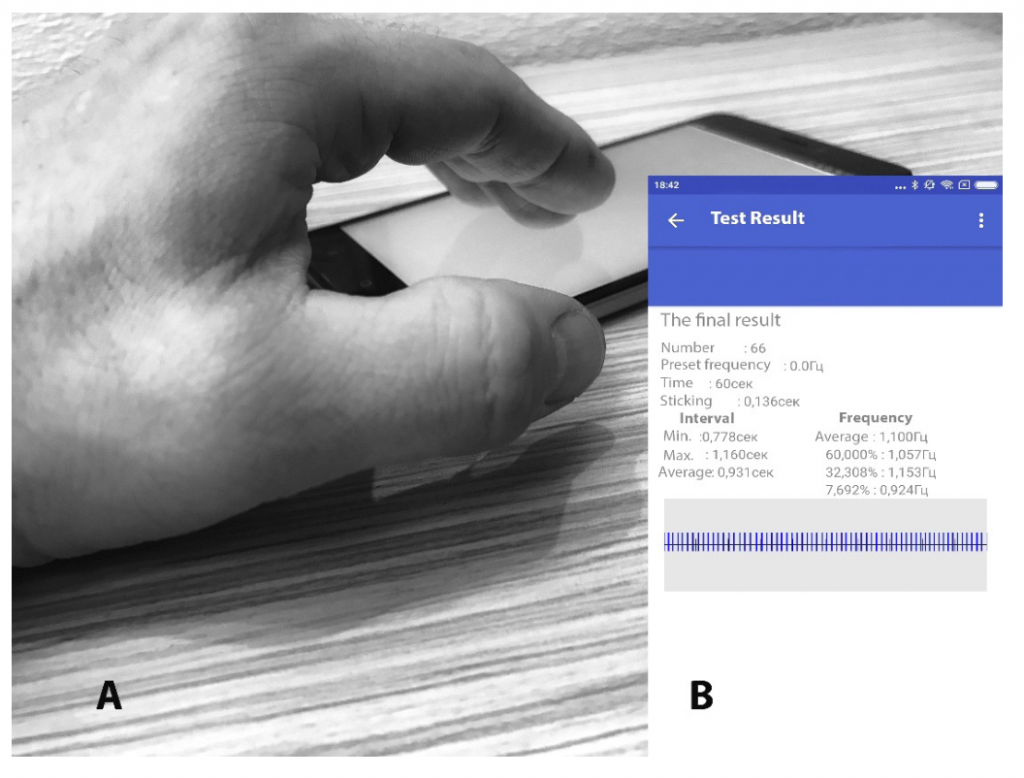 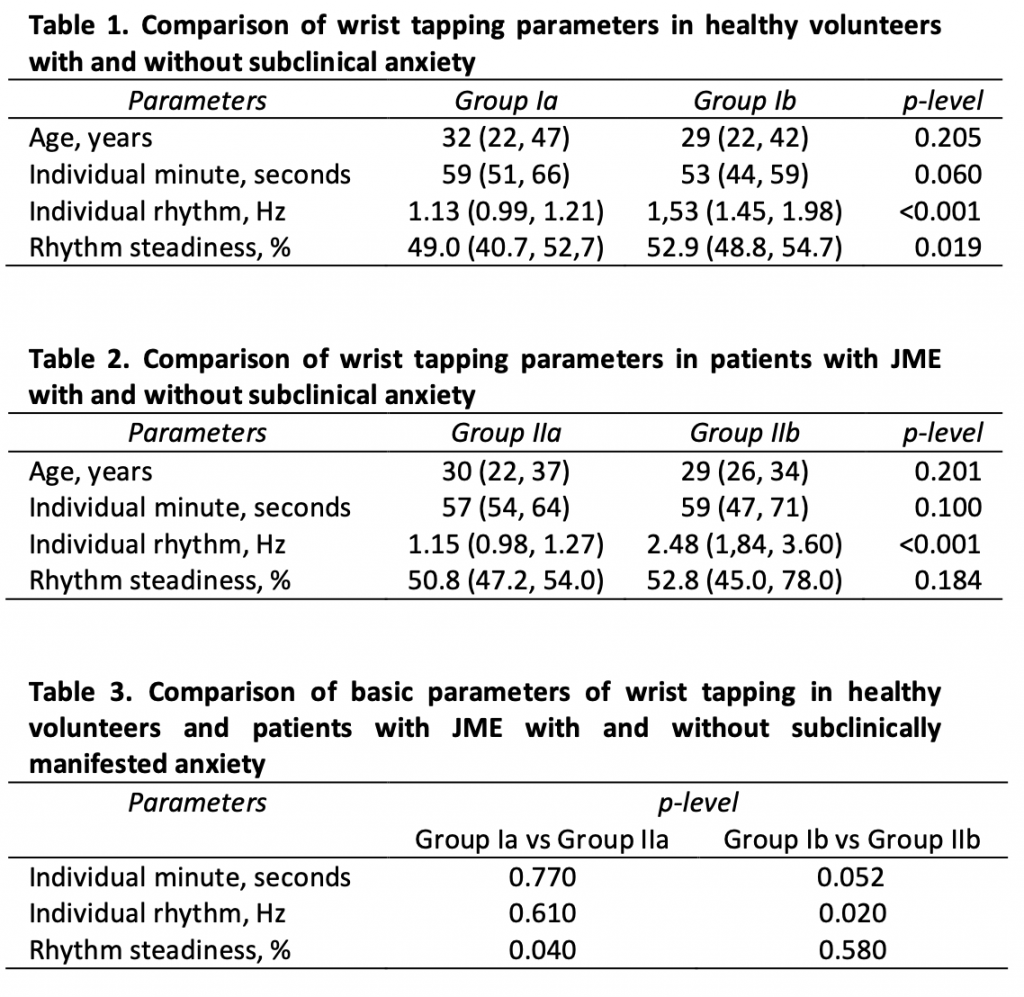 Basic characteristics of wrist tapping in group I (control group) are presented in Table 1. Individual rhythm frequency in healthy individuals without anxiety (subgroup Ia) was significantly lower than in healthy volunteers of comparable age with subclinically manifested anxiety (subgroup Ib) – 1.13 Hz versus 1.53 Hz, respectively (р<0.001). The most steady rhythm of wrist tapping was observed in subjects with anxiety (subgroup Ib) when compared to subjects without anxiety – 52.9% versus 49.0%, respectively (р=0.019). Analysis of obtained results suggests that normative parameters of wrist tapping in young healthy adults and their clinical interpretation should be evaluated with person’s psychological condition taken into account. It is also necessary to account for even subclinical anxiety, as the latter influences quantitative and qualitative parameters of wrist tapping (primarily, individual rhythm and rhythm steadiness) in normal conditions. Basic characteristics of wrist tapping in group II (study group) are shown in Table 2. In comparable study group (patients with JME) there was also an increase in individual rhythm frequency depending on presence or absence of subclinically manifested anxiety – 1.15 Hz versus 2.48 Hz, respectively (р=0.009). Rhythm steadiness in patients with JME was initially high and wasn’t significantly influenced by presence or absence of subclinical anxiety (p<0.05). Comparative analysis of wrist tapping parameters in groups I and II is presented in Table 3. Comparison of basic parameters of wrist tapping in control group Ia and study group IIa (in subjects without anxiety) revealed a trend toward increase of rhythm steadiness in patients with JME relative to healthy volunteers (р=0.040). However, presence of subclinical anxiety led, first of all, to an increase in frequency of individual rhythm (synchronization phenomenon) in subgroup IIb when compared to subgroup Ia (р=0.040). Discussion

Studying influence of anxiety level on parameters of wrist tapping in healthy adult volunteers and patients with JME using our patented «Method of influencing a person’s individual rhythm through exogenous rhythmic stimulation» allowed us to reveal some common trends. Subclinically manifested anxiety leads to an increase in individual rhythm frequency both in healthy volunteers and patients with JME. Nevertheless, acceleration is more pronounced in patients with JME when compared to healthy subjects. It may be possibly related to a presence of primary disease and risk of its decompensation due to anxiety. Anxiety may be a possible trigger for epileptic seizures in patients with JME [3], [6].

Thus, parameters of wrist tapping in young healthy adults and patients with JME, as well as their clinical interpretation, should be evaluated with psychological condition of a subject taken into account.

Reference corridors for wrist tapping parameters of individual rhythm and individual minute, obtained by us using a patented method, may be used to develop new ways of reference bioadaptation for patients suffering from various types of epilepsy.